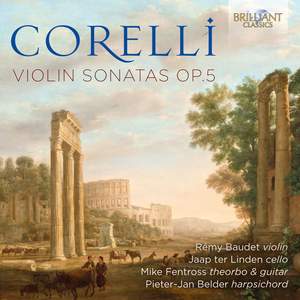 Corelli: Sonata a quattro in D for Trumpet, Strings and Continuo, WoO 4

Corelli: Sonata in B-flat Major, No. 2

This 2004 recording was most recently included in the comprehensive box of Corelli’s works reissued by Brilliant Classics in 2011, when it received a warm welcome from Musicweb International as ‘a reference set’: ‘the playing throughout is accomplished and achieved with a certain nonchalance that suggests the players are very familiar with the music.’

The Op.5 Violin Sonatas press the case for Corelli as among the most underestimated composers of his era. Born a generation before Bach and Handel, he exercised a decisive influence upon their style and that of other composers such as Couperin, Vivaldi and Telemann: the style and practice of Baroque violin playing is unimaginable without the example of Corelli as a guiding spirit in terms of playing, teaching and writing music. As Geminiani (another contemporary) remarked, ‘His merit was not depth of learning like that of Alessandro Scarlatti, nor great fancy or rich invention in melody or harmony, but a nice ear and most delicate taste which led him to select the most pleasing harmonies and melodies and to construct the parts so as to produce the most delightful effect upon the ear.’

All these qualities may be appreciated in abundance in the Op.5 collection of 11 violin sonatas which concludes with perhaps the composer’s best-known work, his standalone set of variations upon the Spanish dance La Folia. This is worked up by Corelli from a slow and poignant sarabande into a wild and exuberant showpiece for the instrument showing the full range of any soloist’s capabilities. It is played here with tremendous brio by Rémy Baudet, the violinist who also leads the Orchestra of the 18th Century founded by Frans Brüggen.

“Corelli has a nice ear and most delicate taste which led him to select the most pleasing harmonies and melodies and to construct the parts so as to produce the most delightful effect upon the ear”, thus said Geminiani, contemporary of Arcangelo Corelli.

Arcangelo Corelli (1653-1713) was one of the most successful Italian composers around 1700, based in the capital of Rome. A charismatic violinist and orchestral leader he created a wealth of instrumental music, played during church services and for domestic use. He was the most widely performed and highly estimated composer of his generation and his purely Italian style had a huge influence in Europe (a.o. Handel and Bach).

Corelli’s violin sonatas are the first works which abandon the trio sonata form and concentrate on the solo violin and the basso continuo, the birth of the violin sonata.

Played by Baroque specialist Rémy Baudet (concert master of the Orchestra of the 18th Century) on a 1690 Giovanni Grancino violin. The continuo is played by Jaap ter Linden (cello), Mike Fentross (theorbo) and Pieter-Jan Belder (harpsichord), for sure the finest Early Music champions of the Low Countries…