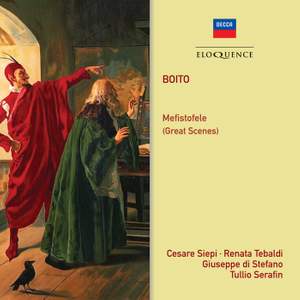 The sole completed opera by one of the nineteenth-century’s most shrewd librettists, Mefistofele has always held a tenuous place on the fringes of the repertoire, but its merits were established in the minds and ears of countless record-buyers in the 1960s and 70s by this 1958 Decca recording, the first to be made in stereo and one which had the field to itself for years. As Conrad Osborne observed in an extended review in High Fidelity magazine, here is a work laden with stunning dramatic effects, and of course blessed with a libretto (Boito’s own) of great poetic strength – and yet overshadowed, unfairly so, by Gounod’s looser stage treatment of the same story. Decca cast the new set from strength. In the pit, the unpredictable genius of Tullio Serafin and in the title role, the superbly intelligent bass of Cesare Siepi leading what Osborne recognised as ‘the best sung Mefistofele since the days’ of the Cetra recording led by Lorenzo Molajoli. Particular praise was reserved at the time for Renata Tebaldi, singing the role of Margherita.

In the role of Faust, Giuseppe di Stefano recorded his parts between June and July 1958, but later, for reasons not confirmed, the part was re-recorded by Mario Del Monaco later the same year for the first issue of the set in April 1959. Harold Rosenthal observed in Opera that ‘with Siepi offering a well-sung and individual portrayal … and Tebaldi at her very best, this could have been an outstanding set’ – but for the presence of Del Monaco. Perhaps in recognition of its error, fifteen years later Decca issued generous excerpts from the opera featuring Di Stefano, thereby eventually publishing the passages he sang. This is the recording reissued here. ‘Tebaldi is perfection as Margherita, and sings with the most glorious and opulent tones I have heard from her for a long time.’ Opera, June 1959

‘It is a pleasure to hear again that eager tone [of Di Stefano], ardently filling such passages as […] the Garden scene and the aria in the Epilogue. All the work’s plums are here … Serafin directs this often lovely and individual score with all his familiar skill.’ Opera, May 1973