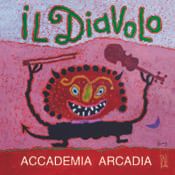 Jacqueline Ogeil from Accademia Arcadia said, “we named the CD in honour of Tartini’s Sonata in G minor, nicknamed the “Devil’s Trill” for its fiendishly difficult violin part and devilish reputation, superbly performed by our own Italian Devil, David Monti.” She added; “It is said that Tartini himself dreamed that the devil appeared to him and asked to be his servant. Tartini handed the devil his violin to test his skill – the devil immediately began to play with such virtuosity that Tartini felt his breath taken away. Upon awakening Tartini immediately grasped his violin in to retain in part, at least, the impression of the musical dream.

An award-winning ensemble and the brainchild of esteemed harpsichordist Dr Jacqueline Ogeil, Accademia Arcadia is deeply honoured to be presenting this repertoire featuring improvising violinist Davide Monti, a regular performer in the world’s top baroque ensembles.

Jacqueline performs on a rare Cristofori Piano (made for her in 2015 in Germany.)

“I am thrilled that our Il Diavolo CD will be the premiere recording of this wondrous instrument.” Jacqueline said.