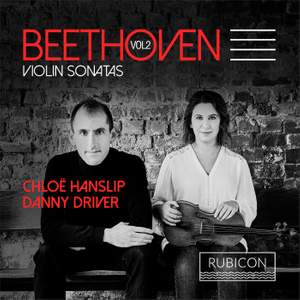 This is a delight...The balance is inclined to overfavour the piano, but Driver’s playing is so good, one can’t complain. His rapport with Hanslip’s splendidly incisive yet sweet-toned violin... — Sunday Times, 29th April 2018 More…

Beethoven’s op.12 set of three violin sonatas had been praised for their technical prowess, but criticised for the abrupt changes in mood, one critic saying (1799) he felt as if he was starting out on a pleasant stroll in the country with a friend, only to end up entangled in bushes and brambles, to return home in a bad mood. Beethoven who was notoriously touchy when it came to such reviews, responded with two sonatas that could not be more extreme in character. The 4th, has been described as a wayward stepchild among his ten violin sonatas is an extraordinary work that would drive our confused critic well and truly further into the brambles! The first movement would usually be found as a finale, and in place of a slow movement is a jokey ‘scherzoso’. The finale has the characteristics of an opening movement. It’s sister work is the famous ‘Spring’ sonata – a work of grace and beauty and one of the most popular of all violin sonatas. The 7th sonata, one of a group of three in the op.30 set is characterised by Beethoven’s stormy and dramatic C minor mood, in stark contrast to its op.30 siblings Chloë Hanslip and Danny Driver have received critical acclaim for their musical partnership both on stage and in the studio. Gramophone described Volume 1 of their Beethoven Sonatas RCD1010 as ‘engaging and accomplished performances...they create a world in which you want to spend time'.

This is a delight...The balance is inclined to overfavour the piano, but Driver’s playing is so good, one can’t complain. His rapport with Hanslip’s splendidly incisive yet sweet-toned violin is complete.