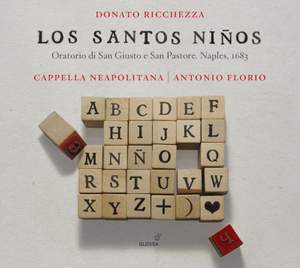 The oratorio is essentially an extended trial scene set to fluent music of contrapuntal elegance and appositely varying dramatic moods for all four participants…The boys are characterised with... — Gramophone Magazine, June 2018 More…

The indefatigable Antonio Florio, along with his associates from Cappella Neapolitana, has succeeded, with a work by Donato Ricchezza, in unearthing another major rediscovery from the Neapolitan Baroque. The labours of Florio – coupled with the ability to turn dry notes on a dusty manuscript into a sumptuous audio feast – can be no better demonstrated than with this release on Glossa of Los Santos Niños: “Oratorio di San Giusto e San Pastore”, written by a composer who was a pupil of the great Francesco Provenzale.

Very little else is known about Donato Ricchezza (c1650-1722), apart from him bequeathing a quantity of scores to the Oratory of the Girolamini in Naples where he worked. The oratorio relates the story of the defence offered by the “holy children” – the brothers Giusto and Pastore, to be martyred in Spain during the Persecution of Diocletian in 303/4 – against the charge of being Christians, as levelled against them first by a soldier and then by the Roman governor Daciano. Marta Fumagalli (contralto), Federica Pagliuca (soprano), Luca Cervoni (tenor) and Giuseppe Naviglio (bass) vividly occupy these four vocal roles.

Why Ricchezza chose this story in 1683 Naples is discussed by Dinko Fabris in his enlightening booklet essay. Meagre additional knowledge about Ricchezza says that he wrote eight other oratorios and, as a bonus, an aria from La gara degli elementi is included here, as are a pair of sinfonias by Ricchezza’s contemporary (and fellow pupil of Provenzale), Gaetano Veneziano.

The oratorio is essentially an extended trial scene set to fluent music of contrapuntal elegance and appositely varying dramatic moods for all four participants…The boys are characterised with dignity and purity by Marta Fumagalli and Federica Pagliuca...Using single strings with a rich group of plucked continuo, Florio ensures a flowing momentum to the narrative.