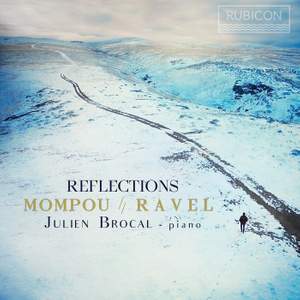 Brocal is a musician of distinction whose imaginative, intelligent and cultivated piano-playing is at once seductive and authoritative. In fact, the perfection and maturity of his Ravel is little... — Gramophone Magazine, May 2018 More…

Julien Brocal’s debut album of Chopin Preludes and the 2nd Sonata was praised by critics when released last year. ‘A protégé of Maria Joao Pires, Julien Brocal has a lot to live up to, and this disc the first for both him and the new label Rubicon – does so beautifully’ Guardian, *****

‘You can hear the qualities Pires admires in his playing, there is a kind of meditative poetry to the Op. 28 Preludes, wrapt stillness, restraint and intensity and they emerge as an absorbing set making sense as a whole. […] An impressive Chopin recital debut for this protege of Maria João Pires, triumphantly vindicating her faith in Brocal, and the faith of this brand- new label Rubicon, something you shouldn’t have to cross to hear Chopin playing of this quality’ BBC Radio 3 Record Review

This is great Chopin, transparent and warm at the same time, fabulously played in both the left and the right, dosed with masterful touch and filled with an inexpressible longing for something that is impossible and yet lets it materialise somehow. In short, we are in the unfathomable realm of a Lipatti, Pollini, Blechacz … sometimes even Cortot.’ OpusKlassiek

Brocal is a musician of distinction whose imaginative, intelligent and cultivated piano-playing is at once seductive and authoritative. In fact, the perfection and maturity of his Ravel is little short of astonishing...The same fine ear and sensitive touch, in combination with a superb sense of timing, bring the two Mompou sets to life.