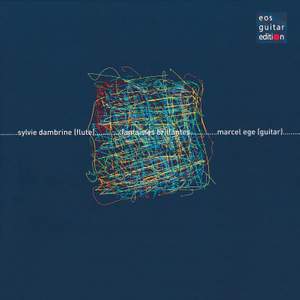 Flautist Sylvie Dambrine was born in Nantes. She completed her basic study under Guy Cottin and her vocational study under Michel Debost at the Conservatoire National Superieur de Paris, achieving first prize. She then undertook studies with Aurele Nicolet. She completed her soloist’s diploma under Jean-Claude Gerard. Sylvie Dambrine has performed in various ensembles since 1990, including the Zurich Baroque Ensemble and Zurich Opera Orchestra. Marcel Ege was born in Brussels and grew up in Zurich. After completing his baccalaureate, he studied classical guitar at the Zurich Music Academy under Walter Feybli, concluding his studies with a teaching and concert diploma. During his studies, Marcel Ege started working intensively with the flamenco guitar. He worked with some of the finest flamenco guitarists in Spain and France. He is a member of the inernationally successful Eos Guitar Quartet. On this release, the duo performs compositions and arrangements for flute and guitar by such composers as Francois Borne, Paulo Bellinati, and Maximo Diego Pujol.