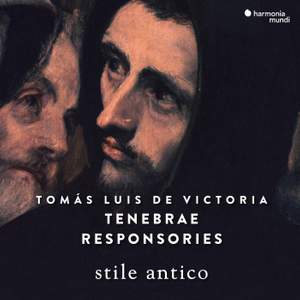 Stile Antico is a vastly experienced ensemble and projects these pieces with poise, technical finesse and nuance. Their account of Christ’s betrayal by Peter (‘Jesum traditit’), for example,... — BBC Music Magazine, May 2018, 4 out of 5 stars More…

Born in 1548, Tomás Luis de Victoria received his early musical training as a chorister of Avila Cathedral under the tutelage of Gerónimo de Espinar and Bernardino de Ribera – the latter of whom can be counted amongst the greatest Spanish composers of his generation. Victoria was probably around seventeen when he travelled to Rome to continue his education at the Collegio Germanico. It was a city rich in opportunity for him, for he stayed there for the first half of his adult life, working as a singer, teacher, organist and maestro di cappella for several institutions including the Collegio Germanico, and taking holy orders. It was not until 1587 that, returning to his native Spain, Victoria settled in Madrid, serving as chaplain to the Dowager Empress Maria, and as maestro de capilla in the chapel of the Convent of Las Descalzas Reales, where she resided, until her death in 1603. After this he remained as chapel organist and one of the convent chaplains until his own death eight years later.

The Tenebrae Responsories come from a larger collection of polyphonic music for Holy Week, the Officium Hebdomadae Sanctae, which Victoria published in 1585, assembling a number of pieces he had written during his years in Rome. The responsories set here are part of the much longer office of Tenebrae, which essentially combined the monastic hours of Matins and Lauds for each of the last three days of Holy Week, the triduum sacrum.

Stile Antico is a vastly experienced ensemble and projects these pieces with poise, technical finesse and nuance. Their account of Christ’s betrayal by Peter (‘Jesum traditit’), for example, captures wonderfully the fateful atmosphere of that event.

This has to be Stile Antico’s best album to date: it’s certainly their most gripping and, as ever with this ensemble, the vocal sound is sumptuous throughout...It’s rather thrilling therefore to hear Stile Antico, who often perform Renaissance polyphony calmly, tap in to the dramatic excitement and atmospheric intensity now associated with these works.

The beautifully blended voices of Stile Antico approach these 18 expressive, cleverly varied Holy Week pieces, written in Rome by the greatest of Spanish-born Renaissance composers, with a poised devoutness rather than theatricality.