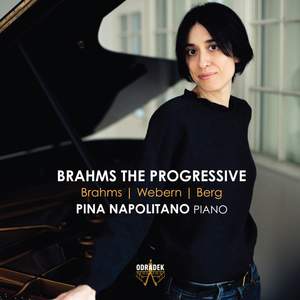 Napolitano says she has always sensed Romantic echoes in works of the Second Viennese School, and in Brahms’s music an elusive modernity: by juxtaposition she hopes to lay bare the continuity... — BBC Music Magazine, June 2018, 4 out of 5 stars More…

For acclaimed pianist Pina Napolitano, there is no better way of looking at art and history than through the lens of inverted time, from the present to the past. This seems to be what Schoenberg invites us to do in his essay, "Brahms the Progressive", in which Brahms, often considered a musical "conservative", becomes instead the father of modernism.

This provides the essence of this album: traversing time in two directions, looking at Brahms from the future of the modern Viennese, and vice versa, looking at the Second Viennese School from the past of Brahmsian romanticism.

For Pina Napolitano there are romantic echoes in the works of the Second Viennese School; an enormous expressive force distilled and compressed, all the way up to Webern's rarefied language where even the silences are charged with music and significance. And on the other hand she has always perceived Brahms' music as a magic prism, in which an entire musical past (encompassing Bach, Beethoven, Chopin, Schumann?) merges together, before breaking off into rivulets that will give birth to 20th-century music.

We hear on this album Berg's Op.1 Sonata, in which there is an intricate network of motivic relations, rhythmic flexibility and metrical ambiguity, the music unfolding with the sort of fluidity and connectedness which are hallmarks of Brahms' style. Harmonically, the sonata begins and ends in B minor, but includes a range of non-tonal harmonies. Webern's Satz (1906) was written not long after he had begun to take lessons with Schoenberg, but the piece shows clearly how Webern's music grew out of the 19th century. Written in 1924, Webern's Kinderstück is his earliest complete piece using 12-note serialism, but it is with his Variations, Op. 27 (1936) that we hear a more typically sophisticated serial technique from Webern.

If Webern's Op. 27 looks back to Brahms in its sense of motivic connectedness, it is perhaps possible to see the opening Intermezzo of Brahms' Op. 119 looking forward to Webern. Both Opp. 118 and 119 were written in 1893 and are among Brahms' final works. Brahms gives the sets the title of Klavierstücke - which Schoenberg would use later for his own works for solo piano.

Italian pianist Pina Napolitano made a splash with her debut CD in 2012: Norman Lebrecht featured her recording of Arnold Schoenberg's complete piano works as his CD of the Week, shortlisting it for his Sinfini Music Album of the Year; Guy Rickards in International Piano Magazine called the CD "outstanding", citing the "tensile strength to her playing that is distinctly hers", and Calum MacDonald in BBC Music Magazine gave it five stars for its "rare penetration, understanding, grace and elegance."

Napolitano says she has always sensed Romantic echoes in works of the Second Viennese School, and in Brahms’s music an elusive modernity: by juxtaposition she hopes to lay bare the continuity between the two…Napolitano’s touch, which is at once forceful and seductive, helps bind everything together on this very enjoyable disc.

Napolitano fares strongest in the Webern and Berg works. She revels in the Variations’ distinct dynamic plateaus and makes the composer’s different accentuations clearly distinct.

Superbly produced, recorded and with carefully considered repertoire, this is a disc of intense, infinitely rewarding music. [Brahms] Napolitano realises the individuality of each movement yet also manages to trace a trajectory that moves inexorably onwards. The famous A major is given with ultimate sensitivity. This is great Brahms, up there with Gilels. Webern’s 1924 Kinderstück receives one of the finest performances in the catalogue: the composer’s innate, cantabile lyricism is captured, for once, on piano; while Webern’s late-Romantic 1906 Satz für Klavier with its flowing lines, is the ideal preface to Napolitano’s persuasive performance of Berg’s Sonata.

These seven beautifully played works seek to illustrate the titular essay by Schoenberg, with its implication that Brahms’s way of developing motifs...The segue from ]Webern's] Op 27 Variations back into the tonal paradise of late Brahms is poignant.