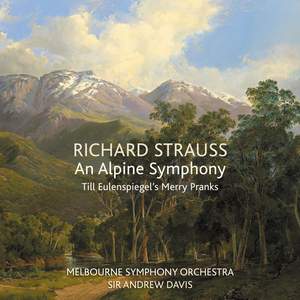 The Melbourne Symphony Orchestra and their Chief Conductor Sir Andrew Davis continue their acclaimed survey of the orchestral music of Richard Strauss with two contrasting, characterful and ambitious works.

An Alpine Symphony is a work of monumental proportions. Depicting the ascent of an Alpine mountainside, from scenes of pastoral beauty to an enormous storm, it calls for over 120 players and lasts over 50 minutes. It was famously the first-ever work to be pressed onto a compact disc, in a recording by Herbert von Karajan and the Berlin Philharmonic.

In reviews of the live concert performances from which this recording is taken, The Australian wrote that "the Strauss rose with organic fury under Davis?s baton, Night?s opening rumblings kept as jittery, primordial whispers and so heightening the triumphant burst of Sunrise. The 22 movements trace the journey of an alpine ascent and descent, with dramatic changes of scenery and climate along the way, various perils for the expedition team, and the humility-inducing grandeur of the view from the summit.

Alert to each imagery shift and adroitly balancing the vast orchestral forces before him, Davis kept intensity bubbling away, even as textures shifted unpredictably from massed splendour to simple sonorities."

A narrative of a very different kind is found in Till Eulenspiegel's Merry Pranks, this time the misadventures of a German peasant: disrupting a market, chasing girls, mocking professors - and, ultimately, being hanged for his misdemeanours. This work finds the MSO's musicians at their most virtuosic, with many of the players called on to depict the vivid characters we encounter in the story.

The MSO's Strauss series was launched in 2014 with a major European tour including the BBC Proms and Concertgebouw, and has so far included Four Last Songs with Erin Wall, Ein Heldenleben, Four Symphonic Interludes, Also Sprach Zarathustra and Don Juan.

The recordings have won significant acclaim from the international press, with BBC Music Magazine describing Also Sprach as 'a benchmark recording'.