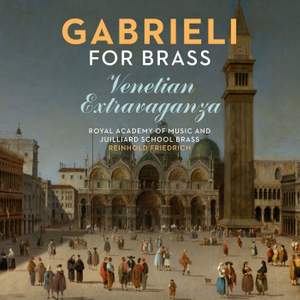 This fascinating transatlantic musical collaboration between the brass players of London’s Royal Academy of Music and New York’s Juilliard School presents enduring masterpieces by Giovanni Gabrieli and his Venetian contemporaries.

Under the direction of Reinhold Friedrich, renowned trumpet soloist and principal trumpet of the Lucerne Festival Orchestra, the players blend modern instruments and intellect with 16th-century technique and tuning to excel in this profoundly challenging repertoire. The beautiful acoustic of St Jude’s, Hampstead results in a gloriously sonorous soundscape; burnished waves of rich, warm trombones alternate with the brilliant, crystalline articulation of trumpets.

Academy Principal Jonathan Freeman-Attwood, who produced the recording, states: ‘We’re hoping it will show Gabrieli as the composer of great intimate music as well as wonderfully grandiloquent Venetian polyphony.’

This remarkable recording features some of the most compelling and attractive instrumental music of the late Renaissance era and boasts performances worthy of Gabrieli’s extraordinary legacy and the reputation of these two outstanding institutions.

Since 2004 the Royal Academy of Music and The Juilliard School have collaborated on a series of major transatlantic projects: the co-commissioning of Kommilitonen! by Sir Peter Maxwell Davies and concerts at the BBC Proms, Lincoln Center and Radio City with Sir Elton John, Sir Colin Davis and John Adams. They have also worked together on numerous chamber and early music projects, including the 2015 Bach tour of New York, Boston, Leipzig and London with Masaaki Suzuki and Rachel Podger.