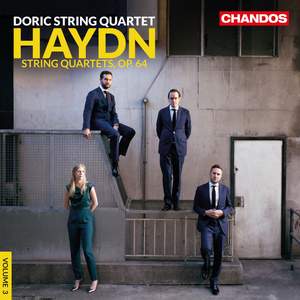 These are performances that take you inside the music, so that it’s almost possible to hear them with a performer’s ear and experience the delight as the notes leap off the page and into life... — BBC Music Magazine, July 2018, 4 out of 5 stars More…

This is volume three in the Doric String Quartet’s ongoing exploration of Haydn’s complete string quartets, already highly praised by major international media and regularly supported by concerts in the world’s greatest venues, from Carnegie and Wigmore halls to the Royal Concertgebouw. The Op. 64 Quartets date from a time of great change for Haydn, compared with the previously recorded Op. 20 and Op. 76. Not only was Haydn preparing for the greatest adventure of his life – what would turn out to be the first of two trips to London – at the time of their composition, in 1790, but they also appeared under a new publisher, Leopold Kozeluch’s firm Magazin de musique. Marked throughout by the virtuosity of the Doric String Quartet, the rhythmic energy as well as the poetic tenderness of the players, this recording showcases a highly characteristic side of Haydn’s music, the inexhaustible versatility and constant unpredictability of the materials.

These are performances that take you inside the music, so that it’s almost possible to hear them with a performer’s ear and experience the delight as the notes leap off the page and into life – the expertly attuned recordings certainly help…Could there be a little more tenderness, sensuous warmth – especially in some of the slow movements? Perhaps, but it’s playing that convinces on its own terms, and technically it’s beyond criticism.

What treasures of invention, innovation, humour and beauty they contain. No 6 in E flat is a particular delight, but so is much else in these richly varied works, to which the excellent Doric players do ample justice.

This is hugely enjoyable to be led through these subtle, wonderful works by such enthusiastic guides.