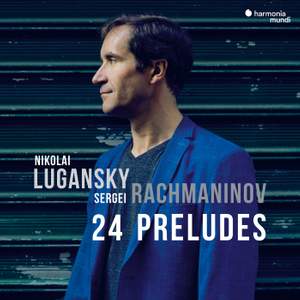 Lugansky captures the depth of emotion and sheer variety…he demonstrates a balance of power and poise that mark him out as a notable Rachmaninov interpreter. The Steinway model D sounds glorious. — BBC Music Magazine, May 2018, More…

No. 2. Maestoso in B-Flat Major

No. 4. Andante cantabile in D Major

No. 6. Andante in E-Flat Major

No. 8. Allegro vivace in A-Flat Major

No. 1. Allegro vivace in C Major

No. 2. Allegretto in B-Flat Minor

No. 3. Allegro vivace in E Major

No. 6. Allegro appassionato in F Minor

Rachmaninoff took the genre of the prelude to its highest degree of perfection with his boundless musical invention and fearsome technical demands. In his first recording for harmonia mundi, Nikolai Lugansky brilliantly meets the challenge, offering a programme of the finest gems in his repertory of choice. A summit of pianistic wizardry!

Lugansky captures the depth of emotion and sheer variety…he demonstrates a balance of power and poise that mark him out as a notable Rachmaninov interpreter. The Steinway model D sounds glorious.

Some commentators have regarded Lugansky as being a cool or remote interpreter, but I cannot agree. He renders the C-sharp minor with a lowering power that immediately holds the attention. There is power, too, in the G minor Op 23/5 and the intense F minor, Op 32/6. Yet it is invidious to cherry-pick, as the most impressive quality of the disc is the performance of the cycle as a whole. Harmonia Mundi’s sound is first-rate: a disc to treasure.