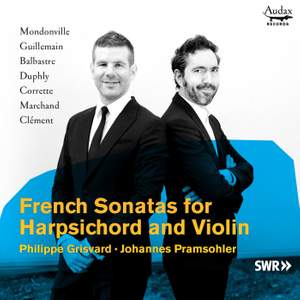 Balbastre: Sonata I in G major

WORLD PREMIERE RECORDINGS In 1740, with the op. 4 of Jean-Joseph Cassan a de Mondonville, a new genre appeared on the scene in France, a genre that was to fundamentally overturn the relationship to the harpsichord - until then a continuo instrument when it was not playing alone: the Pieces de clavecin en sonates avec accompagnement de violon.

Contrary to what the title might suggest, the two instruments engage in a dialogue as equals. Unknowingly, Mondonville imitated the Sei Suonate Cembalo certato e Violino solo that Bach had composed ten years earlier. Moreover, he introduced a thoroughly Italian flavour - certainly an echo of the concertos by Corelli and Vivadli that at the time were often heard at the Concert Spirituel. The following decade then experienced a veritable rage for this form: Corrette, Guillemain, Balbastre, and others put their visions of the theme on paper - each in a very personal manner.

The “Dream Team” (Early Music Review), made up of the two indefatigable researchers Philippe Grisvard and Johannes Pramsohler, has rediscovered this neglected part of the violin-harpsichord repertoire and now presents a captivating selection of the genre’s best works in world premiere recordings on an opulent double CD.