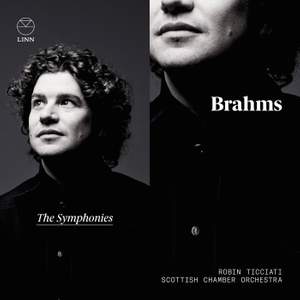 Perhaps one of the most striking aspects of these performances is the sheer variety of colours and timbres Robin Ticciati manages to extract from the outstanding strings of the Scottish Chamber... — BBC Music Magazine, May 2018, 5 out of 5 stars More…

The conductor talks to Katherine about his final recording as Principal Conductor of the Scottish Chamber Orchestra, out this Friday on Linn Records.

As Robin Ticciati enters his final season with the Scottish Chamber Orchestra, Linn celebrates his memorable tenure as Principal Conductor with a recording of four of the most sublime orchestral masterpieces ever written.

The recording legacy of these revolutionary and distinctive works serves to underscore the confidence Ticciati has, not only in his own vision for these symphonies, but also in his partnership with the SCO musicians, who relish Brahms’ highly virtuosic orchestral writing.

The SCO’s renowned recordings of Mozart Symphonies are a natural predecessor to Brahms, who advances the form’s classicism into the Romantic era.

Ahead of the SCO 15/16 season, in which all four symphonies were performed, Ticciati set out his aims: ‘The challenge...is to find a Brahms sound with the orchestra. To find something so unbelievably dark, autumnal, and yet steeped in counterpoint.’

By 2017, that Brahms sound was perfected; Ticciati’s interpretations are both muscular and energized, with detail and life in every line.

‘...the inner orchestral clarity was outstanding...the entire woodwind section bubbled and fizzed in a way that you would never normally associate with the Brahms sound of a full symphony orchestra.’

‘Ticciati wrought a compelling reading of sustained intensity; as ever, his tempo-setting and his phrasing were immaculate.’ Musical Criticism

‘...played with stunning responsiveness by an SCO in mind-bendingly innovatory mode...an altogether-fresh approach to one of classical music’s most familiar and taken-for-granted evergreens.’ The Herald

Perhaps one of the most striking aspects of these performances is the sheer variety of colours and timbres Robin Ticciati manages to extract from the outstanding strings of the Scottish Chamber Orchestra…Throughout each work, Ticciati projects strongly defined phrase characterisation, coupled with a great sense of forward momentum…Exciting, revelatory performances that make you listen afresh to this wonderful life-enhancing music.

By this point in their relationship, Ticciati and the SCO know each other so well that they have every slightest detail at their fingertips, illuminating phrase after phrase with new meaning. For anybody who is open to an alternative view of Brahms this is a highly rewarding set of the symphonies, well played and well recorded. Ticciati’s willingness to let the music breathe is his key virtue and it is that which ultimately gives his performances their distinctive character — a living, breathing, younger man’s Brahms, ready to win new hearts.

There is nothing here that sounds like bog-standard Brahms, nothing that hasn’t been meticulously thought through, barely a bar that doesn’t say something. If that sounds exhausting to listen to, it’s not; Ticciati’s care for keeping the music airborne, coupled with the lucent transparency of the playing, mean that the longest movements fly by.

The key to the new set's special qualities lies in the orchestra's middle name, "chamber". Fifty-seven musicians are featured in total, although the dancing clarity of Ticciati's interpretations isn't solely a matter of numbers. Close attention to phrasings, lithe rhythms and individual instrumental finesse play their part. So does Ticciati's choice of small-bore horns and trombones from the late 19th century, earthier in tone than their modern equivalents.