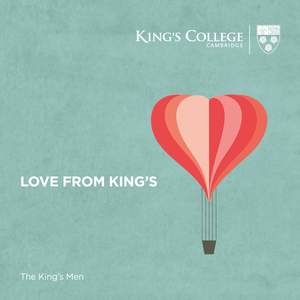 The King's Men - Love from King's

Billy Austin, Louis Jordan: Is You Is, or Is You Ain't My Baby? (Arr. James Oxley)

Newman, R: When She Loved Me (Arr. Benedict Kearns)

Young, Toby: I Carry Your Heart

This year, have an a cappella Valentine’s Day with Love From King’s, the new album from The King’s Men close-harmony group. Curl up with your special one and enjoy these beautiful new arrangements of romantic pop & jazz favourites, featuring classic tracks by Adele, Michael Jackson, Stevie Wonder, Simon & Garfunkel, Michael Bublé and more. The King’s Men is made up of singers from the Choir of King’s College, Cambridge and and nine of the fourteen arrangements on this album were written specially for this recording by current and former members of the group. Unlike many close-harmony groups, The King’s Men record most of the tracks together in a natural acoustic, instead of tracking each voice separately in a studio. This results in stronger musical cohesion and a more authentic sound. Highlights of Love from King’s include Steve Whitford’s performance of Louis Armstrong’s Wonderful World, as well as the specially composed I Carry Your Heart for which there is a live video from the annual Singing on the River concert. This release joins the other critically-acclaimed titles from The King’s Men, including Twelve Days of Christmas, and After Hours which reached #1 in the iTunes Classical Charts.