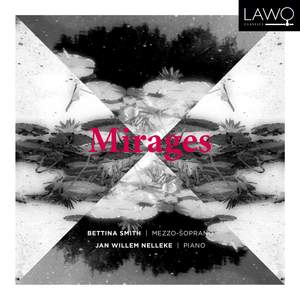 Smith’s dark, low mezzo is unusual and striking in this repertory, and heightens the emotionally ambivalent mood both of Mirages itself and of the early, effusive Poème d’un jour…however, one... — Gramophone Magazine, September 2018 More…

It is truly in his songs that Fauré reveals the flower of his genius?, wrote the composer?s former pupil Maurice Ravel. More than a hundred songs written over six decades made Fauré perhaps the greatest master of the genre French 'melodie'.

The present collection takes us on a journey from Fauré's first song cycle, 'Poème d'un jour' (1878), to his last, 'L'Horizon chimérique' (1921), via the exultant 'La Bonne Chanson' (1892-94) and the intensely concentrated 'Mirages' of 1919. The songs have texts by French poets of Fauré's time; here we find poems of Charles Grandmougin, Baronne de Brimont, Paul Verlaine and Jean de La Ville de Mirmont.

'Mirages' concludes Bettina Smith's project for LAWO Classics of recording all of Gabriel Fauré's cycles for voice and piano. It was preceded in this series by 'Fêtes Galantes' (LWC1116) and 'Serres Chaudes' (LWC1008), both together with pianist Einar Røttingen. Together they have also released 'Voices of Women', with songs of Fartein Valen, Jostein Stalheim and Ketil Hvoslef, composers from Norway's west coast.

Mezzo-soprano Bettina Smith is from Bergen. After graduating from Bergen Conservatory of Music, she studied with Wout Oosterkamp and Elly Ameling at the Royal Conservatory of Music in the Hague. This was followed by two years at the Zürich International Opera Studio. With a wide repertory ranging from medieval to contemporary music, Bettina Smith appears regularly as oratorio and cantata soloist, or together with pianists Jan Willem Nelleke and Einar Røttingen.

Dutch pianist Jan Willem Nelleke's exceptional qualities as a duo partner have been widely recognised. His playing has been described as 'sparkling raindrops, rich chords and beautiful interludes' and as an 'ever alert co-operation with the soloist'.

Smith’s dark, low mezzo is unusual and striking in this repertory, and heightens the emotionally ambivalent mood both of Mirages itself and of the early, effusive Poème d’un jour…however, one notices intermittent intonation problems at the top of the voice …Jan Willem Nelleke’s playing nicely captures the emotional resonance…He’s a forthright accompanist, weightier in tone than some and quietly intense throughout, if just occasionally short on the poetic subtlety that characterises the finest Fauré interpretations