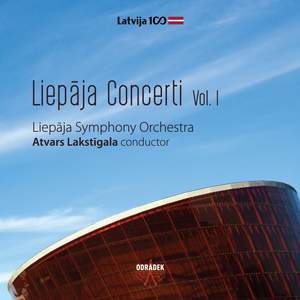 Ešenvalds: Liepāja Concerto No. 4 'Visions of Arctic Night' for Clarinet and Orchestra

The mission of the "Liepaja Concertos" is to capture music that has its roots in the Latvian cultural soil and to introduce it to the world. This new album from Odradek brings together works by Dubra, Smidbergs, Esenvalds, Karlsons and Lacis, performed by the Liepaja Symphony Orchestra under the baton of Atvars Lakstigala.

The Liepaja Symphony Orchestra is the oldest continually performing symphony orchestra in the Baltic States, and the only professional orchestra in the country outside Latvia's capital Riga. Its debut Odradek album, Kurland Sounds, was praised by BBC Music Magazine as "A bracing selection of contemporary Latvian music combining Eastern colour and Western sonorities in dazzling combinations with an operatic intensity that will leave you breathless".

Atvars Lakstigala, a prolific conductor both at home and overseas, has been the Liepaja Symphony Orchestra's Chief Conductor and Music Director from 2010 to 2017. He has won many international competitions, received numerous nominations for the Latvian Grand Music Award, and in 2010 won this award for Debut of the Year.