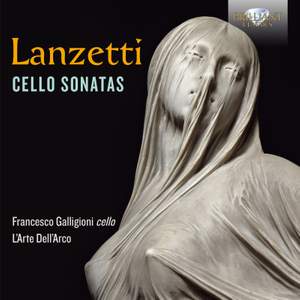 Lanzetti: 6 Solos after an Easy and Elegant Taste: Cello Sonata No. 1 in G Major

Lanzetti: 6 Solos after an Easy and Elegant Taste: Cello Sonata No. 2 in A Minor

Lanzetti: 6 Solos after an Easy and Elegant Taste: Cello Sonata No. 3 in F Major

Lanzetti: 6 Solos after an Easy and Elegant Taste: Cello Sonata No. 4 in C Major

Lanzetti: 6 Solos after an Easy and Elegant Taste: Cello Sonata No. 5 in D Major

Lanzetti: 6 Solos after an Easy and Elegant Taste: Cello Sonata No. 6 in E Minor

A seminal moment in the birth of the cello as a solo instrument: historically informed performances of lively and athletic Baroque trio sonatas.

The series of Brilliant Classics recordings by L’Arte dell’Arco has garnered much admiring press over the years. Their discography has focused on the music of Vivaldi, usefully compiled last year into a 20CD set (BC95200) which was welcomed in Gramophone for ‘superb interpretations’ and the ‘scholarly rigour’ of the scholarship which underpinned the new editions used by the ensemble: ‘Guglielmo and his continuo trio play with lyrical sophistication in the Op.2 violin sonatas, and L’arte dell’Arco’s imaginatively detailed L’estro armonico has a conversational transparency, theatrical verve with rhythms and conjuring of kaleidoscopic moods that are as rewarding as any of the other best versions in the catalogue.’

With the music of Salvatore Lanzetti, the ensemble has turned its attention to rather more out-of-the-way pleasures. This is the most complete set yet assembled of his surviving works: born in Naples in 1710 he was known as the prince of the cello of his day, a celebrated soloist once he undertook extensive northern-European tours. By the second half of the 1730s he was in Paris and then London, where he seems to have lived until at least 1754. He had great success there and, according to the writer Charles Burney, helped to establish a taste for the cello.

His technical innovations included the extensive use of thumb position as well as intricate fingering systems, doubtless developed in harness with his own elaborate music which was clearly designed to display his virtuosity to the full. Four collections of sonatas are assembled here, in which Francesco Galligioni is joined by a variety of colleagues from L’Arte dell’Arco: not only on harpsichord and chamber organ as one would expect, but also a second cello, a violone and an archlute, according to context. The result is satisfyingly varied in timbre, and the album is further enriched by Galligioni’s own reflections on interpreting this little-known repertoire as well as a scholarly introduction to the life and music of Lanzetti.

The origin of what we now call the “modern” violoncello lies in 17th century Naples, where the instrument took its present form, playing position and technique. Naples, one of the musical capitals of the world in the 18th century, produced a wealth of composers and players favouring the cello: Leo, Pergolesi, Vinci, Durante, Fiorenza, Porpora and Salvatore Lanzetti, whose complete music for cello solo is included in this 5CD set. Lanzetti was a super virtuoso on the cello, a famous artist travelling the European capitals as performer and composer, with publications in Amsterdam and London on his name. He introduced new techniques to extend the instrument’s possibilities to the extreme. His music is highly expressive, written in Galant Style, but with enough salt and pepper to keep the listener on the edge of his seat.

Played with incredible skill, virtuosity and taste by Italian cellist Francesco Galligioni, who already recorded the Vivaldi cello concertos and sonatas for Brilliant Classics, to great critical acclaim. He is seconded by members of the elite group L’Arte dell’Arco.