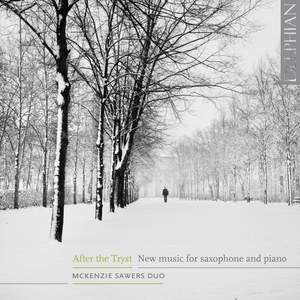 Offer, After The Tryst

A fine demonstration of the soprano sax's potential ... an enjoyable and ear-opening showcase. — Gramophone Magazine, April 2018

MacMillan: After the Tryst (Arr. G. McChrystal for Saxophone & Piano)

Weir: Sketches from a Bagpiper's Album

Nyman: Miserere Paraphrase (From "The Cook, the Thief, His Wife and Her Lover") (Arr. for Saxophone & Piano)

Sue McKenzie and Ingrid Sawers, leading advocates of the rapidly growing repertory for soprano saxophone and piano, make their second Delphian outing with a survey of some of its recent British highlights. James MacMillan’s poignant lyricism gives way to contained ecstasy, then increasingly unfettered vitality, in a pair of seminal works by Michael Nyman. In evocative miniature dramas by Sally Beamish and Judith Weir the instrument gives voice respectively to the half-human, half-spirit nature of Shakespeare’s Caliban and to the life and death of a condemned Scottish bagpiper.

A fine demonstration of the soprano sax's potential ... an enjoyable and ear-opening showcase.