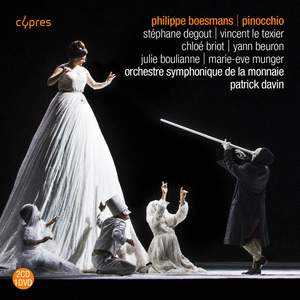 A wonderfully lively, picaresque tale in which the strongest feature is Boesmans’s music – an extraordinary sonic confection…Pinocchio makes brilliant use of an array of styles and idioms…The... — Opera, October 2018 More…

Joel Pommerat writes of his production of the Philippe Boesmans opera, Pinocchio: “Everyone has heard of Pinocchio. He has beome a legend. I have always sought inspiration for my work in the myths of which we ourselves are made. Not only is the story of Pinocchio a powerful one, but the myth of this character is still very much alive, even topical. Pinocchio is a paradoxical character. The moral of his story is not simplistic… Today, as I was ten years ago, I am touched by this story because it combines the exhilarating elements that belong in a tale, such as the epic, the marvelous, the quest as a rite of passage, and universality, as well as something harsher, more social, even political, and unsettling.” Philippe Boesmans’ goal was to be a composer like Wagner. At the age of 45, the self-taught and fiercely independent artist yielded to the allure of the world of opera. By the time he was 80 he had composed 8 operas which, following their premiere productions, have all been repeatedly performed in new productions in the most prestigious opera houses.

A wonderfully lively, picaresque tale in which the strongest feature is Boesmans’s music – an extraordinary sonic confection…Pinocchio makes brilliant use of an array of styles and idioms…The singing is marvellous too, and well served by a vivid recording…Briot brings to the role of Pinocchio clean, youthful tones, but also lively variations of mood and tonal colour as the puppet transforms…Degout delivers powerful but finely modulated performances

Much of Boesmans’ gleefully time-travelling score, is a delight – nimble and imaginatively coloured, slipping effortlessly between styles – and it emerges vividly in this performance, with Chloé Briot very sparky as the errant marionette who has to learn how to be human. Stéphane Degout is outstanding as the narrator and ringmaster, a bit of a grownup Pinocchio himself.