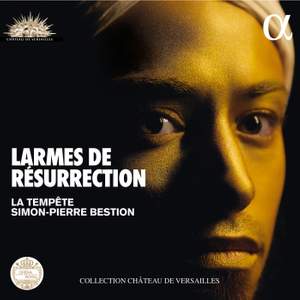 The selections from Israelis Brünnlein alone are worth the price of admission. — Gramophone Magazine, June 2018

In 1623, when the Thirty Years War was raging, Europe was torn apart by the confrontation between Protestant and Catholic peoples. Schütz and Schein, close friends with a deep-rooted Lutheran faith, were thoroughly in accordance with the spirit of their time when they wrote these works imbued with frugality, humility, even austerity. Yet these two great minds were still driven by a burning passion, paradoxically very attached to Italianate style, which is very evident here. With his ensemble La Tempête, Simon-Pierre Bestion has now become established as one of the most creative interpreters on today’s musical scene, revisiting the repertory, juxtaposing works in varying styles and from different periods, as he demonstrated in his first two recordings for Alpha (The Tempest – Diapason d’Or – and Azahar – Choc de Classica). At the head of an exceptional group of performers, equally at home in medieval and contemporary music, he presents here a ‘rewrite’ for a large and colourful orchestra, featuring a Lebanese singer specialising in Byzantine chant in the role of the Evangelist: a radical new take on the ardent mysticism buried in this music, bringing it unexpected vitality and warmth.

The selections from Israelis Brünnlein alone are worth the price of admission.