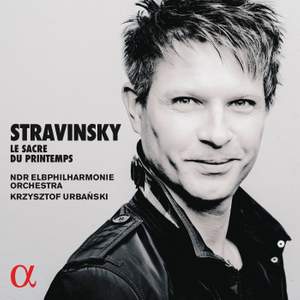 One of the big events of 2017 was the opening of the Hamburg Philharmonie. Krzysztof Urbański and the NDR Elbphilharmonie Orchestra gave inaugural concerts there that made a lasting impact on audiences and critics alike. On this occasion, the Polish conductor chose to record one of the works closest to his heart, The Rite of Spring: "Stravinsky invented a new language. For me, The Rite is not a score, but a painting: on each page, I see Matisse, Gauguin, the Fauve painters . . . It’s an explosion of colours, emotions, and surprises too: if you don’t know the piece, you never know what’s going to happen. It’s so suggestive that you don’t need to do all that much with the orchestra, the magic is written into the music. . . . When I conduct The Rite, I don’t think: the music penetrates your backbone, it’s inside you . . . It’s a ballet, and perhaps it’s because I was a dancer when I was younger that I can’t control my body when I hear and conduct this piece. It’s a mystical experience for me!" The audio recording was made in sessions in the brand new Philharmonie and the Blu-Ray that accompanies the CD includes the film of the concert given in February 2017 in this superb building designed by the Swiss architects Herzog and de Meuron.