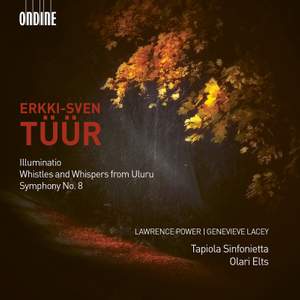 Tüür: Whistles and Whispers from Uluru

Erkki-Sven Tüür (b. 1959) is one of the most outstanding voices in contemporary music today and regarded by many as one of the foremost living symphonists. This new album by Tapiola Sinfonietta and conductor Olari Elts includes world première recordings of two concertante works featuring violist Lawrence Power and recorder soloist Genevieve Lacey together with a late masterpiece, Symphony No. 8. Tüür describes his viola concerto Illuminatio (2008) is 'a pilgrimage towards eternal light'. The work opens with a mysterious soundscape. As the work progresses, the music develops and grows, and the relationships between the soloist and the orchestra is in a constant change. The very final pages bring the work to a magical conclusion shimmering with delicate light. Whistles and Whispers from Uluru (2007) was written to a commission from the Australian Chamber Orchestra for recorder virtuoso Genevieve Lacey. When the composer was writing the work at his summer residence in the island of Hiiumaa in Estonia, it was spring and the air was full of birdsong. In his mind, he connected Uluru, the sacred mountain of the Australian Aborigines, to his northern surroundings, and the two impulses fused. The soloist goes through multiple members of the recorder family, from sopranino down through treble, alto and tenor to bass, and then back to the heights of the sopranino. An electronic soundtrack augments the texture at times. Symphony No. 8 was commissioned by the Scottish Chamber Orchestra and was completed in 2010. Tüür scored the work for a sinfonietta-type ensemble instead of a large symphony orchestra, and as a result the music has at times a chamber music feel. The movements are not separated in the score, but the tripartite division is very clear. On the other hand, the music is characterised by a strong sense of continuity and direction: 'the constant sense of ‘being on the road’, organic development and fluidity [are] crucial for this music', says Tüür.