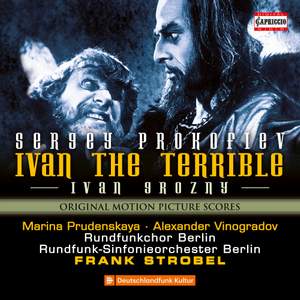 Sonically speaking this Berlin-made production is certainly up to the job and its conductor has a whole series of comparable restorations under his belt…Prudenskaya, fresh from her Royal Opera... — Gramophone Magazine, June 2018 More…

Pt. 1: The Entrance of the Tartars - Overture (Continued)

Pt. 1: The Cannoneers - The Tartars

Pt. 1: Ivan Pleads with the Boyars

Pt. 1: Eternal Remembrance - With All the Saints

Pt. 2: The Death of Glinskaya I

Pt. 2: Shuisky and the Keepers of the Hounds I - The Death of Glinskaya II

Pt. 2: The Death of Glinskaya III

Pt. 2: Wonderful Is God - We Are Innocent and at Their Mercy

Pt. 2: We Are Innocent and at Their Mercy (Continued)

Pt. 2: The Death of Glinskaya IV

Pt. 2: Shuisky and the Keepers of the Hounds II

Pt. 2: Song of the Oprichniki I - Orderly Dance III - Shuisky and the Keepers of the Hounds III

Pt. 2: Song of the Oprichniki II

Pt. 2: The Oath and Song of the Oprichniki III - Chorus II - Vladimir's Murder

Pt. 2: The Entrance of Ivan

Pt. 2: Song of the Beaver (Continued)

Pt. 2: The Oath of the Oprichniki

Ivan the Terrible – the second joint project of Sergei Eisenstein and Sergei Prokofiev – is, much like Alexander Newski, a historical epic, portraying the rise and fall of the autocratic ruler Ivan IV in the 16th century. Sergei Prokofiev’s musical portrayal is unique in film history, for the score conceives both parts of the film on an epic scale. Prokofiev’s rich melodic invention thrives on the expressive sound palette of his native Russia, mostly as they echo the spiritual works of the Russian-orthodox liturgy.

Sonically speaking this Berlin-made production is certainly up to the job and its conductor has a whole series of comparable restorations under his belt…Prudenskaya, fresh from her Royal Opera House debut as Azucena (Il trovatore), has a deep-pile, obviously Slav instrument. Like the more familiar Muscovite bass, Alexander Vinogradov, she seems perfect casting. Only the instrumentals lack a certain Soviet heft.