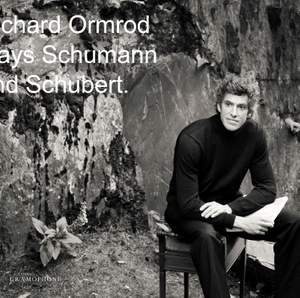 Kreisleriana op. 16 is often thought of as one of Schumann’s most fanciful and eccentric compositions. The title was taken from ETA Hoffmann. Johannes Kreisler was one of the author’s most enduring creations- a wild and gifted Kappelmeister. Schumann had already noted in his diary in 1832 that reading Hoffmann had opened up “new worlds” to him and, as the eight fantasies of Kreisleriana took shape between May and September 1838, the full extent of this influence became clear. Rounding out this album is Schubert’s B-Flat Major Sonata D 960, the composer’s final work for piano written during the final months of his life. Knowing as we do how acutely aware Schubert was by this time of his own approaching death, the work has an almost unbelievable spaciousness and grandeur. The four movements unfold in an unhurried and lyrical manner, and by no means tend at the exclusion of all else to gloominess. Richard Ormrod is an acclaimed soloist. He has twice performed concertos with the Philharmonia orchestra conducted by David Parry, toured the Pacific Rim, made four international tours with the Czech Philharmonic Chamber Orchestra, and made critically acclaimed recordings.