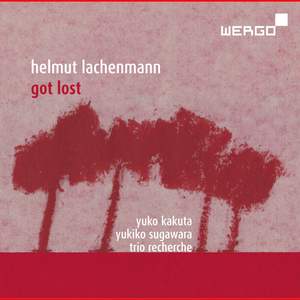 Helmut Lachenmann is often associated with the musique concrète instrumentale that he developed during the middle years of his career. The pieces on this recording, however, were written both before and after this particular aesthetic phase. The point of departure for these ideas (as Lachenmann put it in 1970) is sound itself “as the characteristic result and signal of its mechanical origin and the more or less economical use of the energy required to produce it.” Noise-like instrumental sounds are examined for similarities and contrasts. They are also cataloged: categories and families are created as the foundation of a kind of motivic development using noises and sounds. In “Got Lost” Lachenmann used four lines from Nietzsche, the poem “All Love Letters Are Ridiculous” by Fernando Pessoa and a short note in English lamenting the loss of a laundry basket which gave this work its name.

Lachenmann wrote: “Three only seemingly unrelated texts, stripped of their lofty, poetic, or mundane diction, are all presented by the same sound source – a soprano voice singing ‘any old way’ – and sent into a constantly changing intervallic field of sound, resonance, and movement."