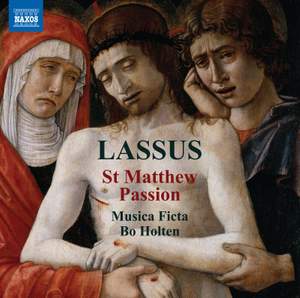 As a presentation of a Renaissance Passion to a modern audience this is very persuasive. — Gramophone Magazine, June 2018

Orlandus Lassus was one of the greatest and most celebrated musicians of his day, and a teacher whose influence extended into the Baroque period and beyond. Although the St Matthew Passion is almost always associated with J.S. Bach’s towering masterpiece, earlier settings developed from plainchant into polyphony throughout the 16th century. Lassus composed four Passions of which this is the most elaborate. His sublimely interwoven polyphonic settings are here placed alongside a traditional Roman Catholic Passion chant through which the roles of Jesus and the Evangelist unfold in a seemingly timeless meditation. Certain key moments in the otherwise austere Passion story are further illuminated in this recording by the inclusion of motets and a spiritual madrigal.

As a presentation of a Renaissance Passion to a modern audience this is very persuasive.