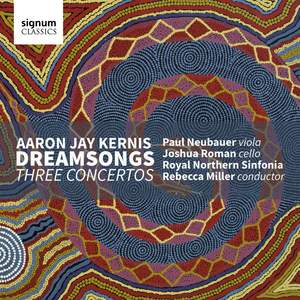 III. A Song My Mother Taught Me

Winner of the 2002 Grawemeyer Award for Music Composition, 1998 Pulitzer Prize, and 2011 Nemmers Award, Aaron Jay Kernis is one of America's most honoured composers. His music appears prominently on concert programs worldwide, and he has been commissioned by America's pre-eminent performing organisations and artists, including the New York Philharmonic, San Fransisco, Toronto, and Mebourne (AU) Symphonies.

The Viola Concerto - composed for the soloist Paul Neubauer - was in the first instance inspired and informed by the viola music of Robert and Clara Schumann, but takes on a number of other influences. Taking the performers own interest in folk music as an influence too, the final movement "A Song My Mother Taught Me" is based on the well-known Yiddish Song Tumbalalaika. "Dreamsongs" also follows folk influences, following inspiration from sources including aboriginal 'dreamsongs' and the West African djembe drum. A virtuosic work, it was developed in collaboration with the cellist Joshua Roman who features as soloist in this recording.

Conductor Rebecca Miller leads the Royal Northern Sinfonia in the final work "Concerto with Echoes", inspired by the sixth Brandenburg Concerto, and in the composer's own words "...comes from its very first measure - the opening passage with two spiraling solo violas, like identical twins following each other breathlessly though a hall of mirrors...this concerto mirrors the Sixth by using only violas, celli and basses, while gradually adding reeds and horns into a loop back to the sound world of the First Brandenburg Concerto".