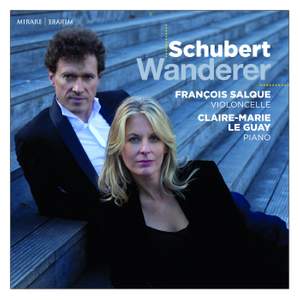 The Farench pianist, Claire-Marie Le Guay, began playing piano at age 4 and entered the Paris Conservatoire at age 14, where she studied with Jacques Rouvier, Pascal Devoyon and Bruno Rigutto. Following her education in Paris, she continued her education with a variety of established teachers, including Dmitri Bashkirov, Fou Ts'ong, Claude Frank, Stanislav Ioudenitch, Alicia de Larrocha, William Grant Naboré, Andreas Staier and Leon Fleisher. She was a winner of several major international competitions: First prize winner at International Contest of Chamber Music of Portogruaro in Italy (1990); Prize-winner at Maria Canals competition in Barcelona (1994); First prize winner at ARD Competition in Munich (1994). In 1998 she was voted France's Young Musician of the Year.

François Salque is recognised as one of the most stunning cellists of his generation. His profound musical thinking and phenomenal technique have earned him many prestigious awards: François is a prize-winner at such international competitions as Lausanne (Unanimous First Prize), Geneva (2nd Prize), ARD Munich, Tchaikovsky in Moscow... He was each time given the highest distinctions ever awarded to a French cellist in the histories of these competitions.