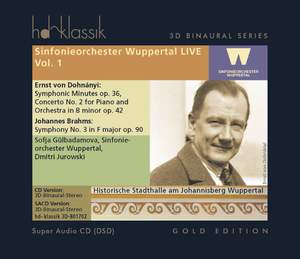 This edition is the second release of the 3D Binaural Seriesby hd-klassik and at the same time the beginning of a new SACD series with live product ions of the Sinfonieorchesters Wuppertal in 3D Binaural Stereo, recorded in one of the most beautiful concert halls in Europe, the Historische Stadthalle am Johannisberg in Wuppertal (Germany).

You can sum up Hungarian music in a single word: Dohnányi! (Béla Bartók) As one of the best-known pianists, composers, teachers, and conductors of his time, Ernst von Dohnányi (1877–1960) shaped musical life perhaps more than anyone else in Hungary.

The Budapest Philharmonic Orchestra, which he served as music director from 1919–1944, was a constant source of inspiration and premièred several of his orchestral works, including the Symphonic Minutes op. 36 from 1933, which indeed are dedicated to his orchestra.

The circumstances leading up to the Concerto No. 2 for Piano and Orchestra in B minor op. 42, created in 1947, are worth recalling: After the Nazi takeover of his homeland, Dohnányi was forced to dissolve the Budapest Philharmonic Orchestra and resign his post. After fleeing from Hungary in 1944 and settling in Austria, fate was constantly cruel to him: Totally-baseless accusations that Dohnányi was a war criminal, which spread over radio stations worldwide in the summer of 1945, degenerating to a disgraceful media campaign and a performance ban, all of which left a profound mark on the Piano Concerto No. 2.

Today we would like to spread awareness of his music and help this great work to secure a firm place in listeners' hearts.