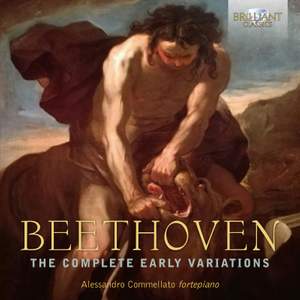 Beethoven: Variations (8) on a Theme by Count Waldstein, WoO 67

Under the title “Early Variations” Alessandro Commellato has brought together all those works for solo and 4 hands piano that form part of one of the most distinctive musical genres of the 18th century: the theme with variations. These works were not included in the main catalogue of Beethoven’s compositions, which is a mystery, given the high quality of the music and the incredible inventiveness and richness of the piano writing, which is on a par with that of the piano sonatas: wit, joy, drama, tragedy, all is included in these masterpieces, which are still undervalued by modern pianists.

Included are the WoO 63‐80, played on copies (made by the famous Italian instrument builder Guido Bizzi) of Böhm, Stein and Walter.

Alessandro Commellato is a great virtuoso, sensitive and stylish musician, who already to great critical acclaim recorded for Brilliant Classics piano concertos by Hummel and chamber music by Ries and Hummel.