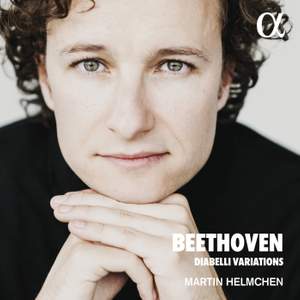 Helmchen’s commanding pianism and perceptive musicianship hold their own in a competitive catalogue…[he] imbues the music’s question-and-answer trajectory [in Variations 13] with a sense of surprise... — Gramophone Magazine, April 2018 More…

The pianist Martin Helmchen has now joined Alpha for several recordings. Acknowledged as one of the leading pianists of his generation, an eminent interpreter of the German repertoire, Helmchen will explore various periods and composers (including Messiaen!), but Beethoven will have a preponderant place in his forthcoming recording projects. Before the complete concertos, planned for 2020, he tackles the Diabelli Variations, ‘a climax in the life of a pianist’. He sees these variations as ‘a voyage to the very heart of the infinity of human feelings and moods, by turns profound, philosophical, satirical’. He regards the cycle as a visionary work that heralds future developments in music, containing the first stirrings of twentieth-century minimalism, atonality and abstraction. This recording is the end result of a long personal association and numerous concerts; a powerful version in which each variation emerges as a masterpiece in its own right.

Helmchen’s commanding pianism and perceptive musicianship hold their own in a competitive catalogue…[he] imbues the music’s question-and-answer trajectory [in Variations 13] with a sense of surprise and comic timing that I have not heard since Charles Rosen’s classic recording… While Variation 14 is on the slow side, Helmchen’s sustaining power and rapt concentration take your breath away.

I haven’t been so captivated by a recording of the Diabellis since Igor Levit’s remarkable account on Sony three years ago. Helmchen’s is a very different affair, less muscular and more buoyant, but equally mesmerising in its spontaneity – it’s as if the variations are being extemporised on the spot – and its awareness of the quirky humour and curious radicalism of the work.

Helmchen is alive to the music’s ever- changing drama; the clarity of his playing brings out every ingenious detail of harmony and rhythm. A delight.

nothing disconcerts the glorious, unshowy German pianist Martin Helmchen — the kind of performer who lifts his audiences up to heaven just by penetrating inside his music with nimble fingers, questing intelligence and a beating heart.
Plus wit: a much-needed quality when these variations lurch into parody, pratfalls and all kinds of musical games.