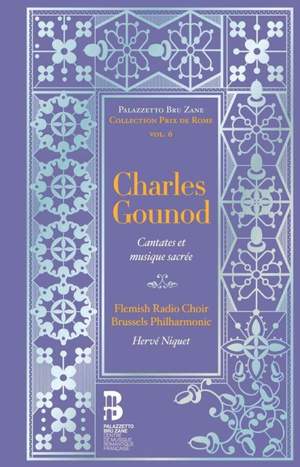 The choral singing has wonderful richness, clarity and fervour, above all in the Messe vocale, which is breathtaking. A tremendous set, it adds immeasurably to our understanding of Gounod’s work.... — Gramophone Magazine More…

An icon of French Romanticism thanks to the enduring popularity of his operas Faust and Roméo et Juliette, Charles Gounod competed three times for the prestigious Prix de Rome between 1837 and 1839. Thus he composed three unpublished cantatas for soloists and orchestra, including Marie Stuart et Rizzio and La Vendetta, which he never had the opportunity to hear in performance. Revealed for the first time, these three cantatas, fine examples of French Romanticism, show a young composer with a remarkable flair for opera. In the end Fernand won him the coveted prize, carrying with it the privilege of a three-year stay (from 1840) at the Villa Medici in Rome. While there he produced several sacred compositions, which have also remained unknown until now. His splendid Messe vocale for unaccompanied choir, written in a neo-Palestrinian style, deserves a place on the programme of every vocal ensemble.

Limited and numbered edition of 3000

The choral singing has wonderful richness, clarity and fervour, above all in the Messe vocale, which is breathtaking. A tremendous set, it adds immeasurably to our understanding of Gounod’s work. Very highly recommended indeed.

It was eventually Fernand which won Gounod the prestigious Prix de Rome, but his two ‘failed’ attempts are equally worth hearing – particularly the superbly dramatic Marie Stuart et Rizzio, sung with full-throttle operatic gusto here by Gabrielle Philiponet and Sébastian Droy...Hervé Niquet’s drive and clarity wards off any danger of these youthful apprentice-pieces feeling stodgy or overblown.