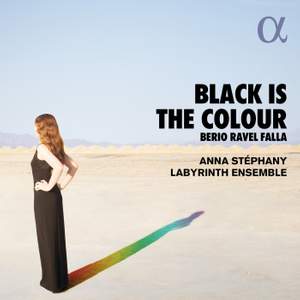 The performances exquisitely capture the shifting nuances and moods of a programme with a French bias, yet decidedly international in spirit…There is no doubt here that Stéphany’s is a highly... — BBC Music Magazine, May 2018, More…

Alpha continues its collaboration with the Festival d’Aix en-Provence and its Academy, which will celebrate its 20th anniversary in 2018. We invite you to discover artists of great talent who take us on a trip to Auvergne, Sicily, Armenia and Azerbaijan thanks to Luciano Berio’s Folk Songs, to Andalusia with Falla’s Psyché on a poem of Georges-Jean Aubry, and to the world of Jules Renard with Ravel’s Histoires naturelles. The last-named are recorded in a version for chamber ensemble: ‘Since Ravel gave Manuel Rosenthal to make an arrangement for large orchestra which we found rather overblown, we set out to find a “ chasseur d’images” (to quote the title of one of Renard’s Histoires naturelles poems) who could transcribe the work without losing its intimate, delicate aspect. . . .

We hope you will be as charmed as we are by Arthur Lavandier’s work, which beautifully conveys the immensely refined timbres and nuances of Ravel’, says the oboist Clément Noël, a member of the Swiss Ensemble Labyrinth.

Anna Stéphany is a true revelation, performing this programme with the technique, the sensuality and the emotional impact that earned her a huge triumph in Mozart at last summer’s Glyndebourne Festival.

The performances exquisitely capture the shifting nuances and moods of a programme with a French bias, yet decidedly international in spirit…There is no doubt here that Stéphany’s is a highly trained voice, but not obtrusively so…The Labyrinth Ensemble proves an ideal partner throughout with its wide range of timbres and natural pacing, the interlude of Ravel Introduction et Allegro being among the finest on disc.

The Anglo-French mezzo’s debut solo recording is a seriously class act, showcasing a richly coloured, beautifully even voice and bags of character – especially in Berio’s madcap folk-songs, where she has a whale of a time as a Sicilian fishwife!

[Folk Songs] can rarely have been as lushly and characterfully performed as here. Stéphany is an excellent linguist: Ravel’s Histoires Naturelles, in an arrangement by Arthur Lavandier, have the dry wit and sensuality of a Crespin devotee, and Falla’s Pysché is sumptuous.

Stéphany’s mezzo-soprano radiates warmth and substance, and Labyrinth bring lean and focused energy to a programme that begins with Luciano Berio’s Folk Songs...[she] makes mesmerising work of the lamenting numbers in various dialects...She is even more assured in Ravel’s Histoires Naturelles, which come up vividly in a new chamber arrangement.