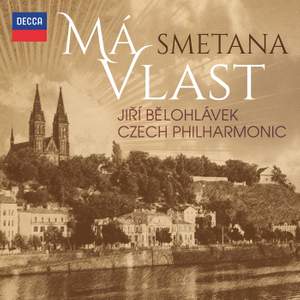 Bělohlávek clearly knew that Smetana, far from being a cheap purveyor of catchy melodies and moment-to-moment thrills, was a sure-footed musical architect, and this recording pays the long game…It... — Gramophone Magazine, March 2018 More…

Late recordings of the Glagolitic Mass, Taras Bulba, the Sinfonietta and The Fiddler's Child bear witness to the Czech conductor's affinity for his countryman's music.

The great Czech conductor and his beloved orchestra perform a definitive Má vlast.

In one of his last recording with the Czech Philharmonic, Jiří Bělohlávek conducts a heartfelt account of Smetana's great set of symphonic poems: Má vlast (My Homeland).

This recording is the first album release by the Czech Philharmonic and their much-loved chief conductor, Jiří Bělohlávek, following his passing in May 2017.

Smetana's Czech masterpiece has played a central role during the most important moments of the Czech Philharmonic's history.

This is an authoritative recording of Má vlast performed by musicians with an innate understanding of the music of their homeland.

Bělohlávek clearly knew that Smetana, far from being a cheap purveyor of catchy melodies and moment-to-moment thrills, was a sure-footed musical architect, and this recording pays the long game…It all makes for a satisfying listen, and one very true to Bělohlávek: not a fireworks display but a showcase for sincere, thoughtful and polished musicianship. An appropriate release to be remembered by.

Má Vlast is music Czechs live and breathe, and this live account has a valedictory quality to match Rafael Kubelik’s unforgettable 1990 Prague concert, when he came out of retirement after 41 years in exile. Bělohlávek’s final thoughts on music he loved are equally special.

The new version has a much warmer, richer and more detailed sound than its predecessor. The orchestral playing on this later performance has a fraction more depth and personality too; the CPO has always been an exceptionally characterful band, and under Bělohlávek they seem to have added muscularity and incisiveness to that mix...they may be pieces that every Czech orchestra knows inside out, but there’s no hint of routine here.