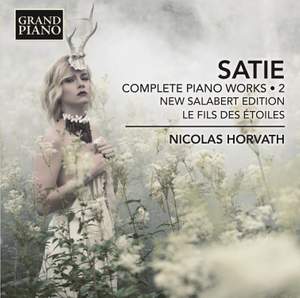 This is the second volume of a momentous new recording of Erik Satie’s complete solo piano music using Satie scholar Robert Orledge’s new and entirely revised Salabert Edition. Composed as incidental music to the pastoral drama set in Chaldea in 3000 BC by French novelist Josephine Péladan, Le Fils des étoiles is one of Satie’s longest scores and rarely heard in its entirety. Fête donnée par des chevaliers normands en l'honneur d'une jeune demoiselle (XIe siècle) invokes the spirit of medieval plainsong. This landmark edition is played on Cosima Wagner's own 1881 Erard piano, Satie’s instrument maker of choice. Recognized at once as a great interpreter of Liszt’s music, Nicolas Horvath became in recent years one of the most sought after pianists of his generation. Holder of a number of awards, like the First Prize of the Scriabin and the Luigi Nono International Competitions, he frequently organizes events and concerts of unusual length, sometimes over twelve hours, such as Philip Glass complete piano music or Erik Satie’s Vexations.