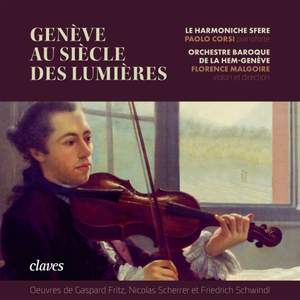 Scherrer: Sonata for cello & piano in B flat minor, Op. 5

Schwindl: Duo for violin & cello in B flat major, Op. 6

Fritz, Gasparo: Sonata for violin in B flat major, Op. 3

Following the Protestant Reform of the 16th century, Geneva became a recognized intellectual and religious centre. Attracting an important community of foreign nobility, the city did not stray from European artistic trends. Itinerant musicians, amateurs and dancing masters were essential actors of the transmission of musical practices as required by proper education.

In the middle of the 17th century, Genevese amateurs, travelers and foreign nobles congregated in “music concerts”. During one of these, forty young men from good families decided, in 1717, to found a concert society that would soon have at its disposal a converted hall in the Town Hall, where, for over a century, Genevese musicians and passing artists would perform. The city could now count on an orchestra, imperative for the interpretation of the contemporary repertoire, but also for welcoming important hosts, celebrating a royal birth or wedding in France, and shortly for playing fashionable comic operas. Whereas the theatre piqued the ire of moralists, music was never disputed. Furthermore, from the dawn of the 18th century, clergymen supported initiatives to establish music schools and even considered the rehabilitation of organs in churches.

Far from limiting itself to patrician salons, musical practice spread amongst the middle class and the world of well-to-do artisans, offering work opportunities to music and dance masters, instrument makers, even music engravers. Geneva’s geographical situation, at the cross-roads of the great European routes, as well as its prosperity, account for the visit of well-known musicians who found here an opportunity to play for or teach amateurs who, if the high quality of certain musical libraries is to go by, were very well informed about music of their time. Coming from various countries and cultures, these musicians brought their cultural knowledge and artistic language to local artists, thus contributing to the development of a flourishing musical life on par with the great European stylistic trends.