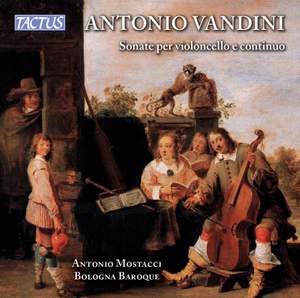 Vandini: Sonatas (6) for cello and continuo

Cello Sonata No. 1 in C Major: I. Andante

Vandini: Cello Sonata No. 2 in A Minor

Cello Sonata No. 2 in A Minor: II. Allegro

Cello Sonata No. 2 in A Minor: III. Allegro assai

Cello Sonata No. 3 in B-Flat Major: I. Grave

Cello Sonata No. 5 in B-Flat Major: I. Largo

In his “Journey to Italy” Charles Burney described how Vandini “played in such a way that he made his instrument speak”. Priest, composer and famous cellist, Antonio Vandini had important assignments in Bergamo, Venice (where he will also get in touch with Vivaldi), and in Padua at the Basilica of Sant’Antonio with Giuseppe Tartini, whom with he will also serve the Count of Prague for 4 years. As witnessed by his correspondence with Tartini and Padre Martini, Vandini will then continue his musical activity working closely with Tartini himself. From 1769 Vandini hosts Tartini, now a widower, in his home until 1770, the year of the death of the high violinist. In 1776 he leaves his position to a pupil and went back to Bologna where he was passed away two years later. He did not leave a great deal of works, those that came to us unequivocally testify that Father Vandini becomes by right part of that great Bolognese cello school together with Gabbrielli, Franceschini, Vitali and Degli Antoni. Antonio Mostacci, accompanied by the Bologna Baroque Ensemble, for the solo part plays a 5-string piccolo cello by the Testore school, 1750 ca.