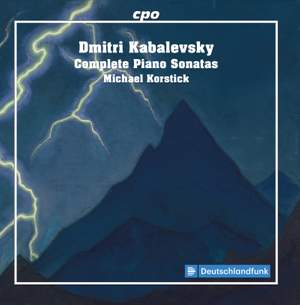 Korstick copes manfully with the problems the sonatas present, and there are many of them…Korstick’s virtuoso performances of both [Rondos] are the highlights of the disc. — Gramophone Magazine, March 2018

Dmitri Borisovich Kabalevsky came behind Prokofiev and Shostakovich and along with Khachaturian in the ‘Big Four’ of Soviet music. Following the releases of Kabalevsky’s four symphonies, his complete works for piano and orchestra, the cello concertos, and his string quartets, the present recording focuses on his music for piano solo. It contains his complete piano sonatas and two great rondo compositions, and a future release will be devoted to his complete préludes. Here the Rondos op. 30, which are merely unassuming short transcriptions from his opera Colas Breugnon, have not been included. Kabalevsky’s sonatas and rondos are not only interesting musical testimonies to their times but also highly attractive virtuoso pieces displaying first-class compositional technique and offering the unbiased listener truly rewarding experiences, not least because they really and truly have been tailor-made for the piano. And once again – Michael Korstick is at his best!

Korstick copes manfully with the problems the sonatas present, and there are many of them…Korstick’s virtuoso performances of both [Rondos] are the highlights of the disc.