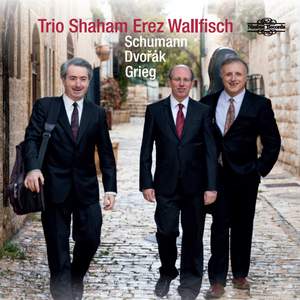 “Piano trios have often been formed by a threesome of like-minded soloists: the fabled ‘Million Dollar Trio’ of Heifetz, Rubinstein and Piatigorsky springs to mind. The present ensemble, founded in 2009, belongs decidedly to this illustrious line. The three trios were recorded in Nimbus’s hall at Wyastone Leys, a most vivid acoustic that brings the three players straight into one’s living room.” (The Strad) Trio Shaham Erez Wallfisch was founded in 2009 and comprises three of the finest international instrumentalists performing today. Playing chamber music together at the Pablo Casals Prades Festival Hagai Shaham and Raphael Wallfisch recognised an immediate musical synergy. Arnon Erez joined them for trio concerts in Lucerne and the Netherlands later that year and the Trio Shaham Erez Wallfisch was established. Since 2009 the Trio have performed, broadcast and recorded widely throughout Europe and Israel, giving concerts in the United Kingdom, Belgium, Netherlands, Germany, France, Israel and Spain. For this new release, they have chosen chamber works by Dvorak, Grieg, and Schumann.

There’s much to admire in the Trio Shaham Erez Wallfisch’s interpretation of t Schumann’s D minor Trio: the expressive shaping of trills and ornaments (especially from violinist Hagai Shaham) scintillating articulation and warm phrasing…The Shaham Erez Wallfisch’s performance of Dvořák’s Dumky Trio is an utter delight – one of the best on record, in fact, which is saying something.