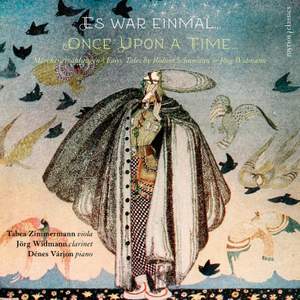 The first movement of Widmann’s piece has fragments in Schumannesque style floating in and out of focus…It’s an altogether impressive work, and Widmann is joined in this premiere recording by... — BBC Music Magazine, April 2018 More…

Once Upon a Time... – Like many other composers of the Romantic era, Robert Schumann found inspiration in the power of fantasy. This program includes his depictions of classic fairy tales in Märchenbilder, the Fantasy Pieces Op. 73, and Märchenerzählungen, as well as a contemporary take on the subject by Jörg Widmann, included in this album as a world premiere recording. The clarinetist and composer is joined by Tabea Zimmermann and Dénes Várjon.

Tabea Zimmermann, Jörg Widmann and Dénes Várjon have known each other for a long time. Since their debut as a trio ensemble in May 2011 at Vienna‘s Konzerthaus, they enjoy playing together on a regular basis. Being highly sought-after soloists who play with the world‘s most reknowned orchestras and conductors, all three share a passion for chamber music, whether as a permanent trio or with other musical partners.

The first movement of Widmann’s piece has fragments in Schumannesque style floating in and out of focus…It’s an altogether impressive work, and Widmann is joined in this premiere recording by two ideal colleagues…Altogether, a fascinating programme, superbly played and recorded.

Once upon a time there was a CD which wove an inspiring and irresistible bond between Robert Schumann’s romantic Fairy Tales and the work of one of today’s most versatile composers, Jörg Widmann. The album Es war einmal proves that, with musicians like Tabea Zimmermann, Denes Varjon and Jörg Widmann, every fairy tale in music may become true.