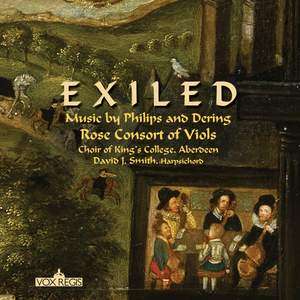 Exiled: Music By Philips And Dering

'Exiled', the new album by the Rose Consort of Viols, the Choir of King's College, Aberdeen and David J Smith, focuses on music by Catholic composers Peter Philips (1560/61-1628) and his younger contemporary, Richard Dering (c.1580-1630).

The album sparkles with musical gems composed in England around 1600, when political and religious tensions spurred composers to extraordinary heights of musical invention. A recently published volume in the scholarly series, Musica Britannica, brings together the consort music of Philips and Dering, and this forms the core of the repertoire on this CD. Keyboard and vocal works by Philips from other volumes add further variety to the collection.

The Rose Consort of Viols takes its name from the celebrated family of viol makers, whose work spanned the growth and flowering of the English consort repertoire. The Consort performs throughout the UK and Europe, has appeared regularly on the BBC and in the major London concert halls, and has received awards for its research and performance of newly-devised programmes.

The Choir of King's College, Aberdeen sings at chapel services at the University of Aberdeen, as well as touring the UK and internationally. Its debut album on the Vox Regis label met with critical acclaim, including a five-star review in Choir and Organ.

David J. Smith is professor of music at the University of Aberdeen, where he directs the Choir of King's College Aberdeen. His editions for the scholarly series Musica Britannica of keyboard music by Peter Philips, and consort music by Philips and Richard Dering, have been used for this recording.