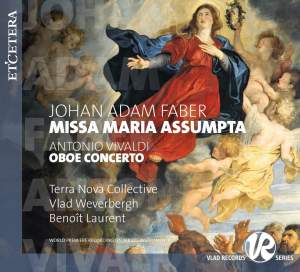 Terra Nova is a musical research collective with a particular interest in forgotten or abandoned repertoire and the period-instrument approach is spot- on, neither academically fussy nor blatantly... — Choir & Organ, March 2018, More…

The circumstances surrounding the composition of the Missa Maria Assumpta by Joannes Adamus Faber (ca. 1692-1759) for the Cathedral of Our Lady in Antwerp in 1720, constitute one of the riddles of the development of the clarinet repertoire. The handwritten score of this mass forms part of the permanent exhibition of the Vleeshuis museum in Antwerp, where it is on permanent loan from the Library Antwerp Royal Conservatory (B-Ac ms.59708).It contains one of the earliest known parts for clarinet. The clarinet had come into existence hardly two decades before in Germany. Its repertoire at that time consisted of a handful of anonymous duets, and two modest parts in the Juditha Triumphans oratorio (1716) by Antonio Vivaldi (1678-1741) and the opera Ifigenia in Aulide (1718) by Antonio Caldara (ca. 1670-1736). Both Vivaldi and Caldara use the new instrument in a popular context, in which the parts could equally well be performed by trumpets. Faber used the clarinet in a completely different and lyrical way. His parts allow the clarinet to enter into dialogue with the singing voices, a role that hitherto had been reserved for the oboe. What inspired Faber to start using the clarinet in this way and how this very early solo piece for clarinet came to be composed in Antwerp continues to puzzle musicologists to this day. Faber is known to have composed only three works, the Missa Maria Assumpta, the Missa et Ressurexit and a motet called Quam Delicto. All three date from 1720, the year in which Faber was accepted as a probationer by the chapter. It is possible that Faber wanted to impress the chapter by giving this new instrument a solo role and thus secure a position as the choirmaster of the cathedral. Other possibilities are that Faber had already become familiar with the clarinet on his journey from his home in Mainz to Antwerp, or that he knew of it via instrument makers, such as Willems and Rottenburgh of Brussels, or Boekhout of Amsterdam. The cover illustration is a detail from the Allegory of Hearing by Jan van Kessel II (1626-1679). Noteworthy in the painting are the numerous wind instruments. Monkeys were known for their playfulness and unpredictability, thus symbolizing the many emotional states of music and the effects it has on people.

TERRA NOVA is a musical research collective based in Antwerp. The ensemble seeks out interesting unknown or forgotten music and breathes new life into it on the concert platform. These works are presented in the concert programme alongside more familiar works of the western musical repertoire. At a Terra Nova concert the audience has the chance to hear a unique musical discovery as well as a familiar masterpiece.

Terra Nova is a musical research collective with a particular interest in forgotten or abandoned repertoire and the period-instrument approach is spot- on, neither academically fussy nor blatantly modernised. An impeccable recording, too, with every voice neatly balanced and soloists not too artificially foregrounded.