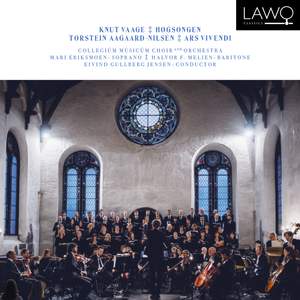 The two works on this new recording from Lawo Classics: ARS VIVENDI (2014) and HØGSONGEN (2009) were both commissioned by Collegium Musicum. Composer Torstein Aagaard-Nilsen composed Ars Vivendi for Choir, Vibraphone and String Orchestra and says of his work: 'In 1999, Norwegian poet Georg Johannesen wrote the collection of poems Ars Vivendi - eller de syv levemåter (eng: Ars Vivendi - or the seven virtues of life). The structure of this collection is organised into weeks, one week for each of the seven virtues. I have chosen one weekday to correspond to each of the virtues, a total of seven poems which became seven movements. This work is dedicated to my wife, Hege.' Knut Vaage conceived the other work on this disc, Hongsongen, for two soloists, Choir and Orchestra in 2009. He says of his composition: 'A few years ago I was pleased to have a new piece of work commissioned for Collegiûm Mûsicûm. From the outset it was clear that I would use the text from Solomon's Song of Songs, especially in light of the fact that I had the opportunity to realise a major work using the church as the performing arena. Hence the title Høgsongen (eng. Song of Songs), a piece written for choir and orchestra with soprano and baritone soloists.' Collegium Musicum consists of approximately 100 musicians and singers. The members of the orchestra are professionals and amateurs with professional leaders, while all choir members are amateurs with a professional conductor. At the concerts, Collegium Musicum often uses young soloists on the verge of a professional career as well as younger Norwegian conductors.