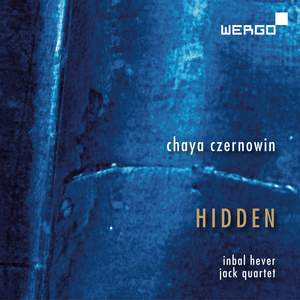 Chaya Czernowin has developed a musical language in which space and gesture are the focus of her compositional interest: the discovery of musical changes in perspective that irritate and can sometimes be misleading. The listener never knows which musical gestures will come into focus and which will fade into the background. The compositional organization of space and time plays an important role in HIDDEN, Chaya Czernowin’s quartet for strings and electronics. This is a work that deals with things unseen: things that are never revealed in their entirety, and can only be perceived (if they are perceived at all) as shadowy intimations. Czernowin says, 'HIDDEN is a slowly unfolding, 45-minute listening experience that permits our ears to turn into eyes. Our ears are given space and time to become accustomed to a totally unpredictable territory of sound'. As Chaya Czernowin has explained, she wanted to create an 'Etude in Fragility' with her cycle of works for voice and breath, Adiantum Capillus-Veneris. 'In the musical organization for this piece, the voice and the breath are equally important'. The breathing is notated very precisely in the score. 'To perform the work then for an audience is very sensual, very familiar, and very physical, but also quite unprotected' (Inbal Hever, mezzo-soprano).