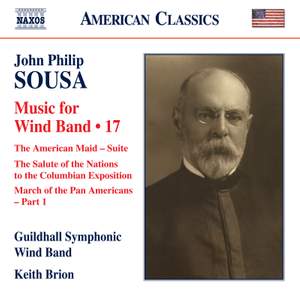 You Do Not Need a Doctor

Sousa: The Salute of the Nations to the Columbian Exposition

Sousa: Humoresque, "A Mingling of the Wets and the Drys"

Sousa, the American master of the march, also enjoyed great prestige in the realm of operetta. The suite from The American Maid, set in a glass factory and culminating in scenes based on the 1898 Spanish-American War, was among the first theatrical shows to employ actual film footage. The beautiful quintet from his early operetta The Smugglers was scored for his eminent brass virtuosi. The medley of drinking songs called A Mingling of the Wets and the Drys was composed during Prohibition, while the unusual and previously unrecorded March of the Pan Americans – Part One celebrates the independent nations of North and South America in 1915 with zest and elan.