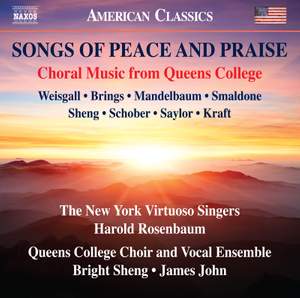 Songs of Peace and Praise

The Village: Mme. Bernaud Is Right

This recording of choral works showcase a group of composers who are or were once faculty members of the Aaron Copland School of Music at Queens College, CUNY. The widely differing languages and poetic aesthetics set by these composers represent the concept of “Songs of Peace and Praise,” from symbolic, descriptive pieces such as Bright Sheng’s Two Folk Songs from Qinghai to tender and moving interpretations of traditional texts such as Allen Brings’ In paradisum. The voices of The New York Virtuoso Singers and Queens College combine to express the universal nature of shared experience.