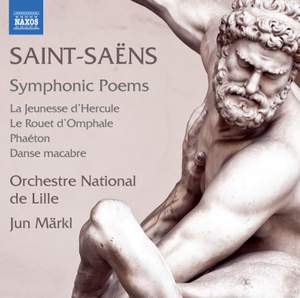 A wide orchestral palette and stirring reserves of drama are used to evoke the youthful audacity and death of Phaéton, the ultimate triumph of virtue over pleasure in La Jeunesse d’Hercule (‘The Youth of Hercules’), and Hercules’ punishment, spinning wool while dressed as a woman, for the ‘inadvertent murder’ of one of his guests, in Le Rouet d’Omphale (‘The Spinning Wheel of Omphale’). The ever-popular Danse macabre is a spooky depiction of Death playing a dance on his fiddle on a tomb in a graveyard surrounded by skeletal dancers. Conductor Jun Märkl specialises in twentieth-century French music for Naxos and has earned international plaudits for his multi-volume Debussy series as well as for his Ravel and Messiaen discs.

Saint-Saëns is on colourful form in this likeable disc. ****

There is no mention of the soloist [in Danse macabre], though it is presumably Fernand Iaciu, long-standing leader since 1984, who cuts an elegant balance between demonic aggression and sweetness…My favourite of the four is Phaéton…Märkl is fleet-footed, with delicate lightness to the harp and strings after the brassy introduction, woodwinds chattering vividly as the wild horses gallop away.

The musical descriptions are brilliant even if there is not always a great deal of substance behind them. The performances from the Lille orchestra are lissom and deft, and Märkl never attempts to overload his reading with portentousness...they are immaculately polished miniatures, which do exactly what they are intended to do.