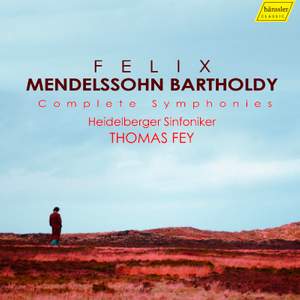 Mendelssohn: String Symphony No. 5 in B flat major

String Symphony No. 6 in E-Flat Major, MWV N6: I. Allegro

Mendelssohn: String Symphony No. 10 in B minor

The exceptional status of Heidelberg’s Symphony Orchestra under the batton of Thomas Fey is impressively documented by the twenty years and more of the ensemble’s existence. 'The orchestra plays in a relaxed manner, with virtuosity and an attractive, infectious spirit. It plunges into the music in a thoroughly adventurous mood, without ever losing its head.' (Fono Forum) Tours have taken the Heidelberger Sinfoniker to many European countries, South America and Japan. The orchestra’s repertoire now ranges beyond the Viennese Classical era into the later 19th century, with emphasis on German early Romantic works. A tally of over 50 CD recordings, notably for the hänssler CLASSIC label, have ensured popular and critical acclaim in recent years for the Heidelberg music-makers.